Ash Barty is ready for "new territory" when she takes on American teenager Amanda Anisimova in the French Open semifinals. 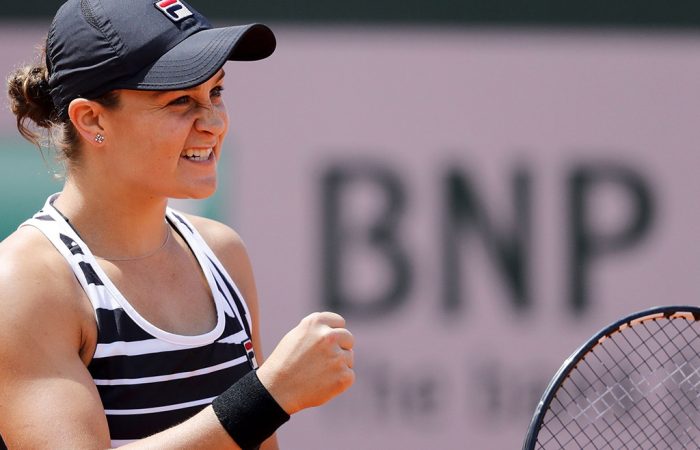 Australia’s Ash Barty says she is “super excited” as she prepares for the first Grand Slam semifinal of her singles career at the French Open on Friday.

The 23-year-old from Queensland will take on unseeded 17-year-old Amanda Anisimova of the US at 7:00pm AEST for a place in the Roland Garros final.

“It’s a new situation for me,” said Barty, the first Australian woman to reach a Grand Slam semifinal since Sam Stosur in Paris three years ago.

“It’s a little bit of a new territory, not quite sure what to expect tomorrow, but I will prepare and do the best that I can to keep it normal.

Barty has swept through the draw in Paris, dropping just one set, winning 84% of her service games, leading the ace count with 30 and converting a remarkable 66% of break points.

Last year’ semifinalist Madison Keys was the latest player to come up against the Aussie’s all-court game in Thursday’s quarterfinal.

“I felt like I was in control. I got the balls I wanted, and I was able to put the balls in difficult positions for Maddie. Really, really happy with how we went about it.”

There is no chance that Anisimova will be taken lightly following the teenager’s quarterfinal demolition of reigning champion Simona Halep.

It will be a first meeting between the Australian No.8 seed and the American, ranked No.51 in the world.

Barty is the highest-ranked player left in the draw, with Britain’s Johanna Konta (world No.26) taking on Czech 19-year-old Marketa Vondrousova (world No.38) in the other semifinal.

“I haven’t seen much of her in general. I haven’t played against her. So it’s a clean slate for both of us and exciting opportunity for all four of us that are in the semis.

“I know we are all very excited. It’s just an amazing situation to be in.”

Despite the growing sense of excitement, Barty has been able to remain calm as she closes in on a potentially career-defining moment.

“This tournament has felt very quiet to me,” she said.

“It’s been relaxed. And it’s been quite bizarre because we are at a Slam, obviously. But in my mind, it’s been a very quiet tournament.”

Barty’s run to the last four continues a superb year that has seen her land a first Premier Mandatory title at the Miami Open, help guide Australia to November’s Fed Cup final and break into the world’s top 10.

The success comes two years on from her return to tennis following a break to play cricket, at which point she came back with a world ranking of 623.

“It feels like just yesterday that we started, jumped on the plane to come over here to start again. So much has happened in between.

“I have grown as a person and obviously as a player, as well. But I have had some heartbreaking moments. I’ve had some amazing moments. But all in all, I have enjoyed every single minute.”

Barty has already ensured a new career-high ranking of No.4 and she could rise as high as No.2 if she lifts the trophy on Saturday.

“Super excited,” she said. “And the fact that we’re still here in the last few days is incredible.”