Ash Barty's winning run continues in both singles and doubles at Roland Garros. 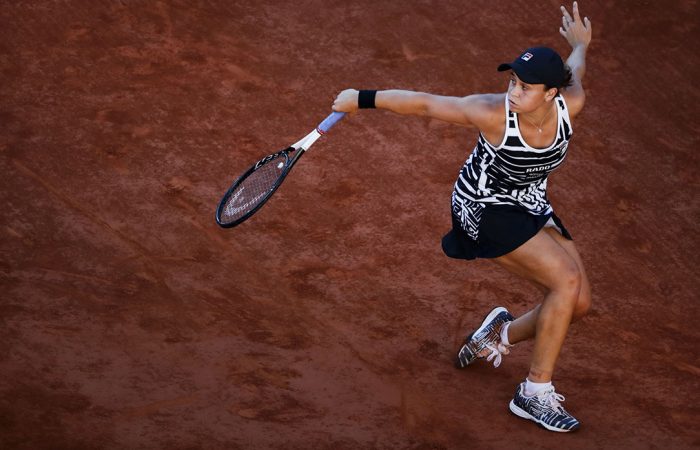 A steeled Ash Barty is sure she’s ready to handle the occasion as she enters the second week of the French Open as a genuine contender in a wide open field.

The Australian’s path to a Grand Slam title on the Paris clay was turned on its head during a dramatic Saturday at Roland Garros, when both Serena Williams and Naomi Osaka fell.

Eighth seed Barty was calm among the chaos, comfortably booking a maiden fourth-round appearance with a 6-3 6-1 defeat of former world No.9 Andrea Petkovic.

Up next stop is a tussle with Sofia Kenin, who blasted Williams off the court to end the 10th seed’s hunt for a record-equalling 24th major title.

World No.1 Osaka had won the last two majors but her defeat means defending champion Simona Halep (third seed) is now the only higher-ranked woman between Barty and a Roland Garros final.

Barty has now reached the final 16 of her last three Grand Slams, while an unbeaten run to the Fed Cup final and a title in Miami have corresponded with a steady rise into the world’s top 10.

“I think overall, me being able to handle different occasions is getting better and better,” Barty said.

“Regardless of whether it’s a Slam, a big tournament, Fed Cup, all of these different occasions I’ve been thrown into, I feel like we’ve been able to deal with it really well and, in a way, bring it back to the way I want to play and just simplify it.”

Barty is vying to become the first Australian champion in Paris since Margaret Court in 1973 but the level-headed 23-year-old isn’t thinking beyond her next round.

“(Kenin) is an incredible competitor, she really is,” Barty said of the 20-year-old.

“I got a little bit of a taste of that at Fed Cup earlier this year.

“She certainly respects every opponent but doesn’t play their reputation.

“She plays them just on the other side of the net and that’s one of her best attributes.

“It’s going to be an extremely tough match.”

Barty is still also alive in the women’s doubles draw, winning a thrilling second round match alongside Belarusian partner Victoria Azarenka on Sunday. The No.11 seeds scored a 4-6 7-6(6) 6-1 win over Swiss Belinda Bencic and Slovak Viktoria Kuzmova, saving three match points in the second set.

Barty, who reached the final in Paris with compatriot Casey Dellacqua two years ago, has a chance to rise to No.1 if she wins the Roland Garros doubles title.