Ash Barty and Sam Stosur teamed up to complete a thrilling doubles victory over Victoria Azarenka and Aryna Sabalenka - sending Australia through to the Fed Cup final. 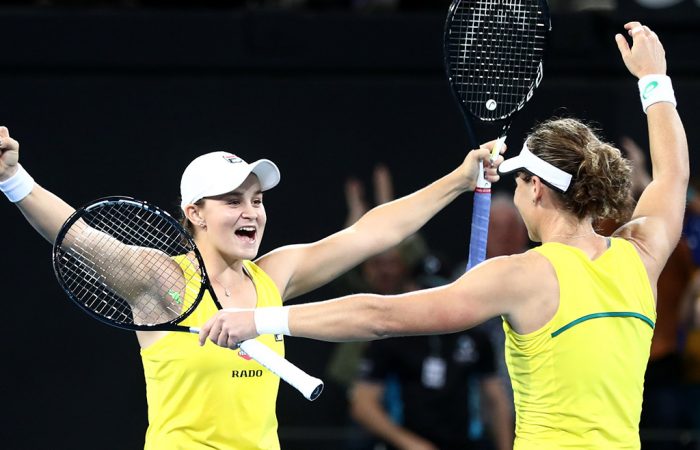 Ash Barty and Sam Stosur have combined to win the fifth and decisive doubles rubber to deliver Australia a 3-2 victory over Belarus in Brisbane, a result sending the hosts into the 2019 Fed Cup final.

Playing together for the first time, Barty and Stosur notched a 7-5 3-6 6-2 win over Victoria Azarenka and Aryna Sabalenka in a highly-charged atmosphere at Pat Rafter Arena.

Australia will host the final against either France or Romania on 9-10 November.

“We hadn’t exactly planned for it to come to the doubles, yet we were prepared. We got to that position, and I was really pleased today with both the outputs of Ash – it was phenomenal tennis out there – and Sam gave it her best.

“You can just see the joy in our faces too – winning that doubles rubber, what it means. We’re now in the final. I’m just so proud.”

This was a doubles match of the highest quality, putting four of the best doubles practitioners on the same court.

Australia broke immediately to open a 2-0 lead and Stosur, appearing to have completely re-set after her heavy loss to Azarenka in her previous singles match, smacked an ace out wide to extend the Aussies’ lead to 3-1.

Potent from the baseline, the Belarusians broke back and the set was soon locked at 5-5.

Here, the Aussies went up a gear, breaking serve in the 11th game and winning a succession of thrilling points on serve in the following game to take the opening set.

A tenser, tighter second set followed, with both teams inseparable through the first six games.

Barty and Stosur had multiple break point opportunities in the seventh game but Belarus escaped with a hold, broke Stosur in the eighth game for a 5-3 lead and, with Sabalenka now serving for the set, sent the match to a decider when Azarenka volleyed a winner.

It was Stosur who helped Australia wrest back the momentum early in the third set; a solid return from the veteran drew an error from Azarenka to hand the Aussies a break point, which Stosur converted with a backhand volley winner.

This tennis is absolutely breathtaking!

She and Barty consolidated that break and now had command of the match with a 4-1 final-set lead.

From there, the two Aussies grew bolder and more confident in their hitting; Stosur fired consecutive forehand winners and held to extend the Aussies lead to 5-2.

And with Azarenka serving to try to keep the Belarusians in the match, Barty and Stosur bullied with their returns, quickly moving ahead 0-40 and converting their third match point.

It was a teary Stosur who fronted the media after the victory.

“Don’t get me started,” she laughed when asked if she felt as emotional as she looked.

“I’m obviously very happy, very pleased. It was super exciting playing out there in the dubs. Obviosuly the singles didn’t go the way I wanted it to, but to bounce back in 30 minutes and come out and play as well as what we did together, and with the team supporting us, that was just an incredible feeling.”

"This crowd is unreal"

The victory meant that Barty completed a stunning weekend, improving her record to 3-0 after two wins in her two earlier singles rubbers.

She becomes the first player to go a flawless 6-0 in the opening two Fed Cup ties within a single year, after also going undefeated in Australia’s victory over the United States in February.

“It’s unbelievable, it really it. And for me to be able to share this with the girls sitting here now, it’s unreal,” she said.

“The way that Mol’s been able to create this team atmosphere and environment and this real want and desire to play for Australia, it’s been unbelievable.

“It’s been a two or three year process to get to this point – we’ve taken our opportunity here.”