The Australian Fed Cup team set to face Belarus in Brisbane on Easter weekend has been selected. 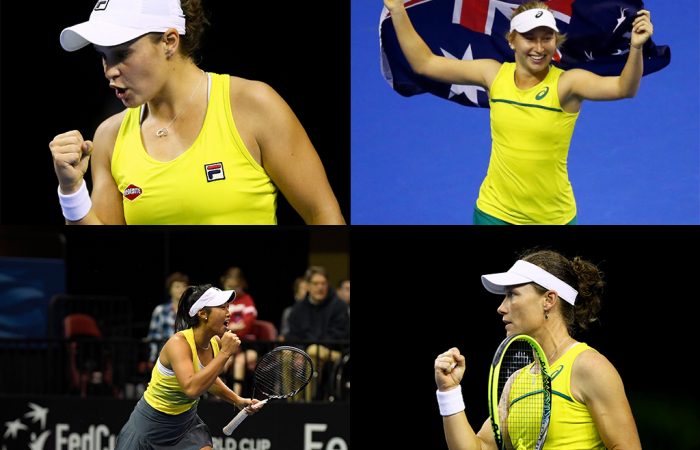 The crucial semifinal will take place at Pat Rafter Arena in Brisbane from 20-21 April 2019.

Ash Barty enters the tie as the top ranked player in both singles and doubles from both teams, after recently cracking the world’s top 10. Barty’s impressive 14-2 Fed Cup win-loss record will prove pivotal to Australia’s hopes of winning through to the Fed Cup final for the first time since 1993.

Sam Stosur, currently ranked world No. 17 in doubles, has amassed the most WTA doubles points of any player for 2019 on the back of winning the Australian Open women’s doubles title and reaching the doubles final in Miami. Stosur’s experience is a huge asset to the team, and she also holds the record for the most Australia Fed Cup singles wins.

World No. 58 Gavrilova comes in with recent wins over world No. 37 Dayana Yastremska (UKR) and world No. 31 Mihaela Buzarnescu (ROU). Last tie against the USA she stretched Australian Open semifinalist Danielle Collins to three sets and will be looking to build on her Fed Cup form.

Priscilla Hon has hit a career high ranking of No.130 this week and is excited to be part of the team after triumphing in the USA in a live fifth-rubber alongside Ash Barty. Recently she qualified for Indian Wells after defeating two top 100 opponents.

“We’ve selected a really strong team and it’s going to be a great fight between Australia and Belarus,” Alicia Molik said.

“Ash has gone from strength-to-strength, and we are extremely lucky as a nation and team to have such a fantastic role model on-and-off court. She is one of the world’s best Fed Cup players with her versatility in singles and doubles, and a great leader and asset to the team.

“It’s also exciting to welcome Sam back into the team, she has a really strong Fed Cup record and her recent doubles results are unparalleled, and Dasha and Pri are both great team players. They always enjoy Fed Cup weeks and have had some great matches since the US.

“Reaching a Fed Cup semifinal is an amazing feeling not only for me as a captain, but the team and Australia. I know they are all incredibly proud to represent their country and will give it their all as we try to make our first final since 1993.”

World No. 39 and Australian No.2 Ajla Tomlanovic (Qld) is unfortunately ineligible to compete for Australia in Fed Cup due to ITF regulations as she has previously represented Croatia in 2010 and 2011.