The teams are selected and competition is underway for our Aussie boys at the World Junior Tennis Asia / Oceania qualifying in Malaysia, with are girls set to compete from nehxt week. 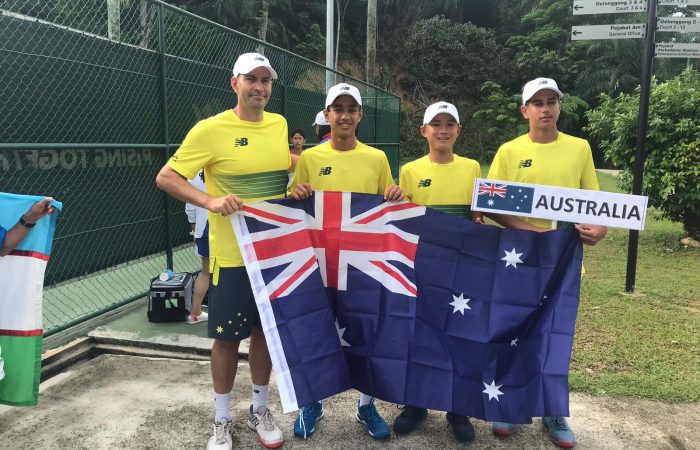 The Aussie teams are vying for a top four finish in the Asia / Oceania regional event to earn a spot in the ITF World Junior Tennis Finals to be held August in Projestov, Czech Republic.

Zach Viiala (WA), Jeremy Zhang (NSW) and Alex Despoja (SA) make up the 14/u boys’ team are competing from 1-6 April under the guidance of National Academy coach Damien Ward.

The girls’ team is made up of Hana Sonton (Qld), Taylah Preston (WA) and Jessie Culley (WA), will depart on Thursday 4 April to compete from 8-13 April led by National Academy coach Steve Blundell.

The Aussie hopefuls follow in the footsteps of some of the world’s top players including Novak Djokovic (SRB), Rafael Nadal (ESP), Lleyton Hewitt (AUS), Kim Clijsters (BEL) and Justine Henin (BEL), who all participated in the event as juniors.

“Being selected to represent your country at just 13 and 14 is a big opportunity for these junior players and I’m sure they will enjoy the international competition and embrace the  team environment, which is not something you often have the chance to do in tennis,” Director of Performance Wally Masur said.

“World Junior Tennis is a great platform for our players to compete against the world’s best junior players, and these events really give the kids the chance to see where they stand and benchmark themselves against the top players in the Asia / Oceania region.

“Junior team competitions such as World Junior Tennis and Junior Davis and Fed Cup become a springboard for fostering growth, performance and development within the tennis world, and many of the current world top 100 men and women have played in these events,” Masur continued.

The ITF World Junior Tennis tournament is an international team competition for players aged 14-and-under. Players compete for their nation against the world’s top 14/u stars.