Ash Barty will combine with CoCo Vandeweghe in doubles at the WTA Finals before next week heading to Zhuhai for singles action at the WTA Elite Trophy. 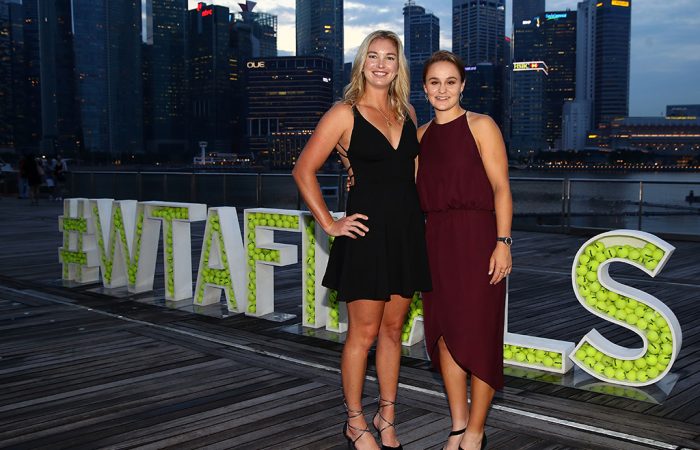 Ash Barty and CoCo Vandeweghe will play Elise Mertens and Demi Schuurs in the first round of the WTA Finals doubles event.

The draw ceremony was conducted in Singapore on Tuesday night, with Barty and Vandeweghe – the US Open and Miami champions – among the eight-team field.

“It was really nice to kind of get the monkey off the back,” Barty said of winning her first Grand Slam title in New York.

“She (Vandeweghe) is trying to break me out of my shell a little bit,” she added, referring to their exuberant celebrations. “It’s slowly cracking, but there’s still a lot to go (laughter).”

The WTA Finals draw uses a knockout format; Barty and Vandeweghe are unseeded while the Belgian-Dutch combo of Mertens and Schuurs are seeded fourth.

This is the second straight year Barty has appeared in doubles in Singapore. Last year she combined with countrywoman Casey Dellacqua, falling in the first round to Kiki Bertens and Johanna Larsson.

Barty will also feature – again for the second straight year – in the 12-player singles field at next week’s WTA Elite Trophy in Zhuhai, China.