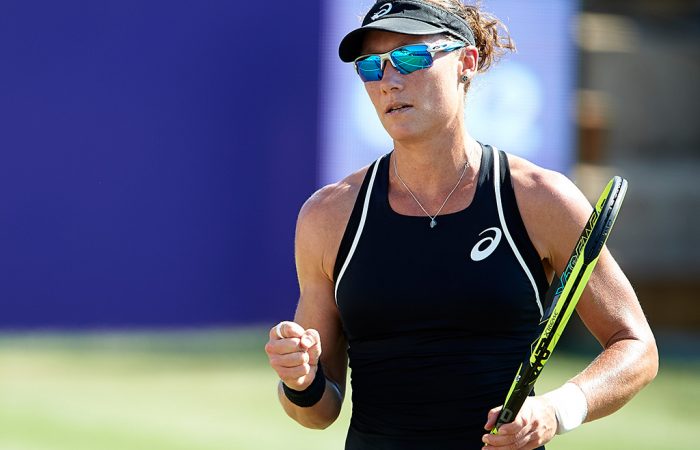 Sam Stosur on Wednesday hit Lara Arruabarrena off the court to advance to the quarterfinals of the WTA Mallorca Open.

Stosur’s 6-3 6-4 win over the Spanish wildcard means the Australian will feature in the last eight at a grass-court tournament for the first time since Eastbourne in 2011.

Next up for the 34-year-old will be either qualifier Alison Riske – who stunned second seed Angelique Kerber in the first round – or Slovenia’s Polona Hercog.

She won nearly 80 per cent of first-serve points (that percentage climbed to 86 in the second set) and faced just two break points during the match.

Her triumph was capped by seven aces and 25 winners to just 11 unforced errors.

A wildcard pairing at Queen’s Club, Australians Lleyton Hewitt and Nick Kyrgios in the first round created a shock in the men’s doubles event with an upset victory over Pierre-Hugues Herbert and Nicolas Mahut.

The Frenchmen were the No.3 seeds and recent champions at Roland Garros, but that didn’t discourage Hewitt and Kyrgios, who emerged triumphant 6-4 3-6 [10-6].

A Kyrgios forehand winner down the line sent the Aussies through to a quarterfinal meeting with Brits Kyle Edmund and Neal Skupski.

Hewitt has shown much promise in a return to the doubles arena in 2018; the veteran reached the Australian Open quarters with Sam Groth and the same stage in Estoril with Alex De Minaur. He also reached the semifinals of the Surbiton Challenger with Alex Bolt, whom he’ll team with at Wimbledon courtesy of a wildcard.

Thompson’s 6-2 6-2 victory, completed in 79 minutes, sends him through to a quarterfinal meeting against either No.8 seed Sergiy Stakhovsky or American Kevin King.

The Australian entered the Ilkley tournament on a four-match losing streak yet has rebounded impressively, and on Wednesday ended Moriya’s own nine-match winning streak.

Another Australian, Arina Rodionova, kicked off her campaign at the $100,000 ITF women’s event at the same venue with a 6-0 6-3 thrashing of Russian Irina Khromacheva.

Rodionova, who displayed her grass-court prowess last year with a run to the second round at Wimbledon after winning three rounds of qualifying, next faces Papua New Guinea’s Abigail Tere-Apisah.

Kyrgios, following his victory over Andy Murray on Tuesday, will return to Centre Court at Queen’s to take on Edmund in the last 16 of the singles. After a suitable rest, he and Hewitt will face Edmund and Skupski in doubles, on Court 1.

John Peers will also feature in doubles action at Queen’s; with partner Henri Kontinen, he’ll face Americans Mike Bryan and Jack Sock for a place in the semifinals.

In Halle, Matt Ebden opens proceedings on the stadium court against German Philipp Kohlschreiber while in Mallorca, Ajla Tomljanovic will attempt to continue her winning streak when she takes on fellow qualifier Rebecca Peterson in the second round.

In Ilkley, Rodionova and Jason Kubler will attempt to reach the quarterfinals.