Alex De Minaur scores his 11th top 100-win of the season to move into quarterfinals at ATP Challenger event in Surbiton. 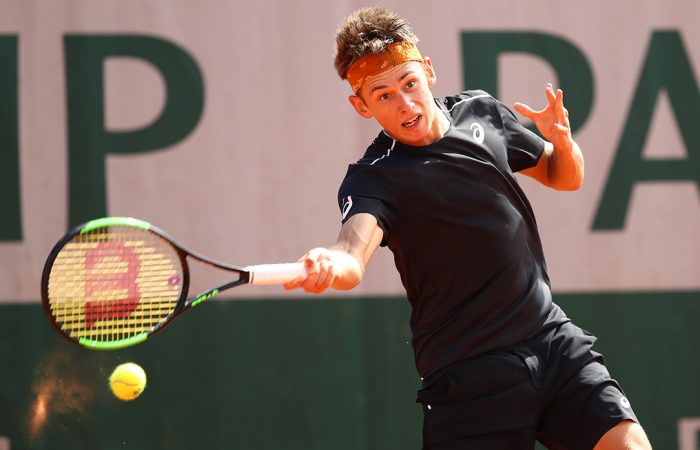 Alex De Minaur is one win away from a top 100 debut.

The 19-year-old Australian, currently ranked No.105, is projected to break into the world’s top 100 if he makes the semifinals at an ATP Challenger event in Surbiton this week.

De Minaur moved into the quarterfinals of the British grass court tournament with an impressive 6-4 7-6(4) win over American world No.68 Taylor Fritz in the second round. The Australian did not face a break point on serve as he recorded his 11th top 100-win of the season.

De Minaur now faces third-seeded Yuki Bhambri in the quarterfinals. The No.93-ranked Indian is aiming for his third Australian scalp this week, having defeated Thanasi Kokkinakis and Alex Bolt in the opening two rounds. Bhambri posted a 6-4 3-6 6-1 victory over Bolt in the second round last night.

Bolt remains in alive in the doubles draw, teaming with Australian Davis Cup captain Lleyton Hewitt to upset top-seeded duo Aisam-Ul-Haq Qureshi and Divij Sharan 6-3 6-3 in the quarterfinals. They now play British brothers Ken Skupski and Neal Skupski for a place in the final.

It's been 20 years since @lleytonhewitt lifted his maiden 🏆 in Perth.

Ahead of his #ATPChallenger return in Surbiton, the former World No. 1 discusses the importance of the circuit in this edition of the Challenger Vault… pic.twitter.com/F8s8g4qbej

Australian John-Patrick Smith is also into the doubles semifinals. He teamed with American Nicholas Monroe to record a 4-6 7-6(3) [10-2] quarterfinal win over Jurgen Melzer and Ramkumar Ramanathan last night.

Meanwhile an Australian is guaranteed to win the women’s doubles title at an ITF tournament also being staged in Surbiton this week.

Hon is the only Australian left in the women’s singles draw. She faces third-seeded American Madison Brengle in the second round tonight.