Kyrgios moves through to Houston quarters

Nick Kyrgios was impressive in his Houston debut, belting 21 aces en route to a second-round win over Bjorn Fratangelo. 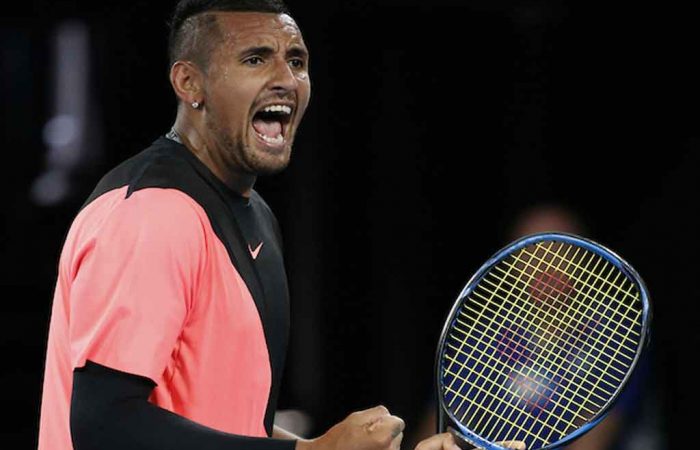 Nick Kyrgios has shrugged off the loss of the first set to take his place in the last eight of the US Men’s Clay Court Championship in Houston.

The Aussie recovered to beat Bjorn Fratangelo 6-7(2) 6-1 6-2, setting up a quarterfinal meeting with Ivo Karlovic.

Kyrgios and Fratangelo went game for game in the opening set. Kyrgios arrived at break point in the ninth game, which had he converted would have given him the chance to serve for the set.

But he missed a backhand return long; Fratangelo escaped with a service hold and went on to dominate the tiebreak.

From there, the Aussie went up a level, getting into a groove on serve – he finished the match with 21 aces – and quickly establishing a 5-0 lead.

With the second set in the bag, Kyrgios raced to a 4-0 lead in the third and overwhelmed Fratangelo with his power and variety.

He sealed victory in a touch over 90 minutes in his Houston debut.

At the WTA event in Bogota, another Aussie, Ajla Tomljanovic, fell in a tense, rain-affected match to Mexican qualifier Renata Zarazua.

The match was suspended on Tuesday with Tomljanovic leading 5-4 in the third, but when play resumed on Wednesday, Zarazua scraped her way to a 1-6 6-4 7-6(6) victory.