Charleston: Barty through, Stosur out

Ash Barty enjoyed a strong start to her Charleston campaign while fellow Aussie Sam Stosur, the tournament champion in 2010, fell at the first hurdle. 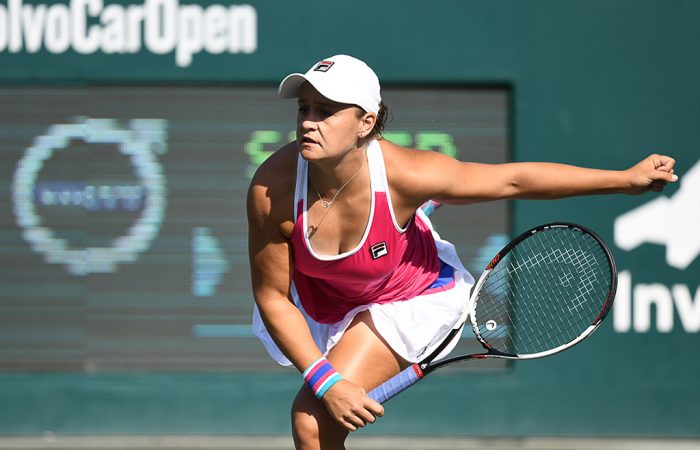 World No.18 Ash Barty made light work of unseeded American Sofia Kenin to advance to the second round of the Volvo Car Open in Charleston.

There was no such luck for Sam Stosur, who suffered an early exit against world No.107 Kristie Ahn.

Ninth seed Barty opened her clay campaign in style, breaking her teenage opponent for a 3-1 lead in the first set and immediately breaking Kenin again in the second, racing to a 2-0 lead in scarcely as many minutes.

She survived two break points to extend the margin to 3-1 but there was little further resistance from the Moscow-born 19-year-old; Barty won 6-3 6-2.

“I think it was always going to be a little bit of rust wearing off … I haven’t been on a clay court since the French Open last year so it’s minimal preparation for me but I’m very happy with how I served and how I played today,” Barty said.

The Australian, who teamed up with CoCo Vandeweghe to win the Miami Open doubles crown, has her sights set on a big year after a breakout 2017 which saw her enter the world’s top 20 having started in the 200s.

“We did a lot of hard work last year and the year before setting down a foundation and I feel like I haven’t got too many flaws now,” Barty said.

“We’re always wanting to get better, I’m very much a perfectionist.”

Stosur had 26 unforced errors in her 6-2 6-4 loss to Ahn, her first opening-round loss at the green claycourt tournament since 2007.

The 2010 winner surrendered the first set after a tight opening period but fought back after trailing 4-0 in the second.