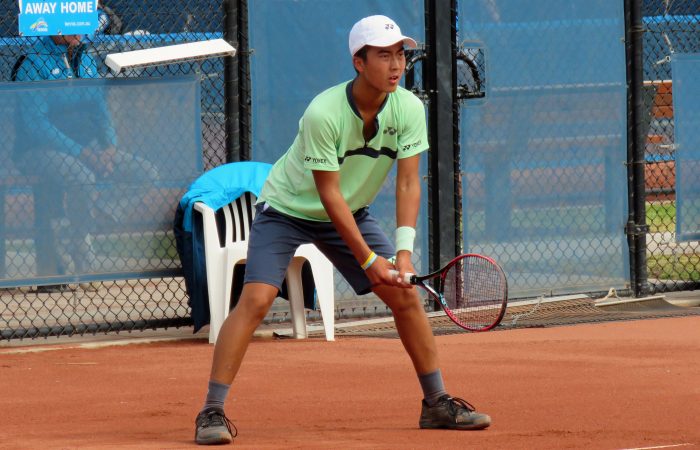 Rinky Hijikata has earned his first ATP points after an opening round victory at the Mornington Peninsula International #2 on Tuesday.

In a tight battle from the outset, the 17-year-old wildcard from Sydney lost the first set in a tiebreaker to Scott Puodziunas but recovered to take the match 6-7(3) 7-6(3) 6-2.

“I think I just competed really well today,” Hijikata said. “it was pretty tough conditions and it was good to find a way.

“I was happy the way I was able to stay in the match even when I was down quite a bit.”

Also a wildcard at this year’s Australian Open Junior Championships, Hijikata made an impressive run to the quarterfinals, which ended in a loss to Great Britain’s Aidan McHugh.

“I had a tough off-season and it’s paid off,” he said. “The Aussie Open was really good and now getting my first ATP points is pretty big.”

Hijjikata played in his first ITF Futures main draw just last week in Mornington, losing to Matthew Dellavedova. “I lost in three, so I was pretty happy to get over the line this time,” he said.

He will now await the winner of third seed Max Purcell and Calum Puttergill. “It would really good to test myself against Max,” Hijikata said of that potential. “He’s always been one of the older guys I train with in Sydney.”

Following the conclusion of the Australian Pro Tour this week, Hinjikata will travel to Europe. “I’ll play the junior French Open and junior Wimbledon but I might also try and play some Futures over there now that I’ve got a ranking,” he said.

In other results on Tuesday, Victorian second seed Andrew Whittington reached the second round after defeating Japan’s Kazuma Kawachi and Blake Ellis (No.6) also proceeded with a win over qualifier Zac Osbourne.

On Wednesday, top seed Marc Polmans will open his campaign on a quest to win his fifth consecutive Australian pro Tour title and defend the title he won in Mornington last year. He faces Thai qualifier Chanchai Sookton-Eng.