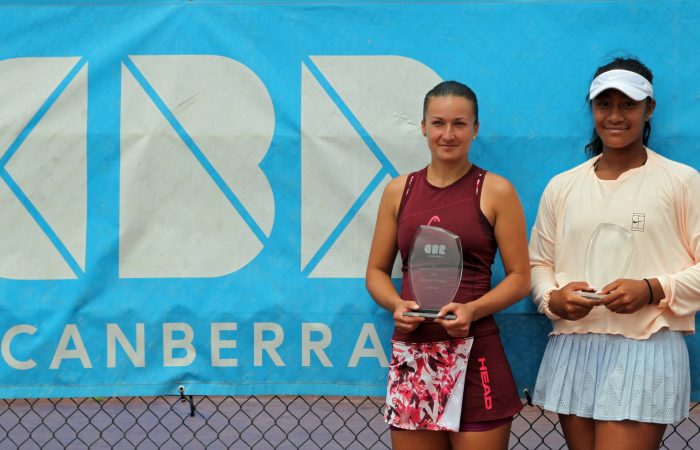 Victorian teenager Destanee Aiava has been upstaged by Dalila Jakupovic in the final of the ACT Claycourt International #1 in Canberra on Sunday.

The pair had met only once previously with Aiava prevailing in a third set tiebreak, but on this occasion it was all about the fifth-seeded Slovenian, who maintained the solid form she has shown all week to take the match 6-4 6-4.

Aiava, who defeated second seed Miyu Kato of Japan in the semifinals, dropped only one set on the Canberra clay enroute to the final.

In a match twice interrupted due to rain, Jakupovic, 26, said the conditions were very difficult. “I I think that makes you even more happy to win because it was very tough to play today,” she said.

“I had a good week. I really like it here; the courts are great,” she added. “I hadn’t played on clay for some time and I love to be back on it again.”

The world No.177 said playing Aiava, a rising star, on her home soil was not a major factor. “I try not to think about these things. I just focus on playing my game, my style,” she said.

Jakupovic also partnered Queenslander Priscilla Hon to take out the doubles title. The pair upset Japanese top seeds Miyu Kato and Makato Nanomiya 6-4 4-6 [10-7] on Friday to secure the clean sweep in Canberra for the Slovenian.

Action continues in Canberra with the qualifying rounds for the ACT Claycourt International #2 already underway this weekend.