After a win over Ukraine that showcased the squad's maturity and tight-knit nature, Australia stands just one victory away from a return to the Fed Cup World Group in 2019. 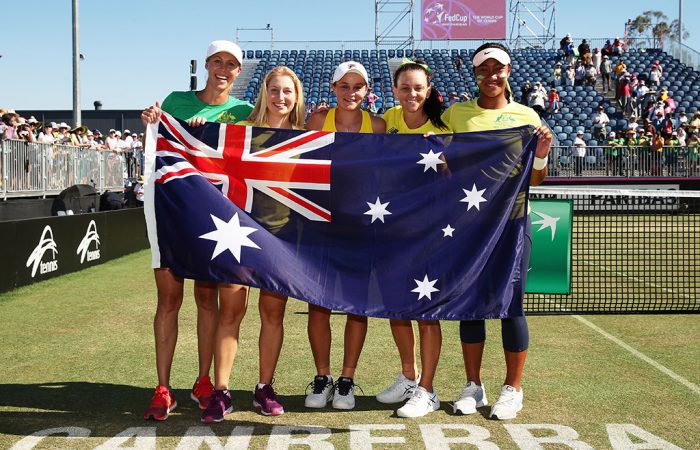 So often does Casey Dellacqua tell Ash Barty how proud she is of her great friend and doubles partner that the matriarch of Australia’s Fed Cup team jokes that she’s wary of giving the brilliant 21-year-old a big head.

No danger of that, fortunately, but nor of underestimating Barty’s contribution to the triumphant team’s collective Canberra weekend. That is, a 3-2 defeat of the Ukraine on a Barty-urged grass court to qualify for a Barty-inspired World Group Play-off tie on 22-23 April.

For a tight-knit squad that last visited the competition’s elite level in 2015, the top eight beckons once again.

“I think the result is a sign of the maturity we have as a team despite being, on the whole, a very young team,’’ said captain Alicia Molik, adding that winless singles No.2 Daria Gavrilova would learn from her mistake of placing too much pressure on herself to achieve what she wants almost too badly.

“A great weekend, and it just goes to show, too, our choice of surface couldn’t have been better and I think it’s a measure of our resilience as well,’’ Molik said, after hosting an admittedly understrength Ukrainian team in the World Group II first round. “We can’t wait to find out who we play next.’’

Barty dropped her opening set, but just the one, winning both her singles points and on Sunday adding what turned out to be the surest of bets – the doubles, 6-3 6-4 – in tandem with an emotional Dellacqua, to extend their collective Fed Cup record to 5-1.

Actually, everyone was a bit teary. Not only was it Casey’s birthday, but Daria Gavrilova had lost her second singles match, and cried buckets of tears before taking a cold shower and a few deep breaths and and returning to courtside to support her team. Bravo.

“I didn’t have the best singles matches – to be honest, I had two shockers – but I will learn from them and I’m sure my teammates are gonna support me, which they always have and I will learn from this experience,’’ Gavrilova said after losing the fourth rubber to the unranked Nadiia Kitchenok, as the world No.26’s backhand failed, her serve faltered, and – after converting just one of 12 break points – her emotions unravelled, too.

Yet the doubles, as always seemed likely, managed to save the day (and tie), and both Australian players and their captain said they never doubted their ability to clinch the decisive doubles rubber against the Kichenok twins.

Lyudmyla had already taken the opening set on day one against Barty in what threatened, for those first 40 minutes, to be a huge boilover. She was then replaced for the fourth rubber (surprisingly but successfully) by Nadiia, who played two great sets to win in three and level the tie at 2-2.

Crisis time for the hosts. Casey and Ash, over to you.

“Once we knew we that we were gonna have to go out there and play, there’s just such a calm feeling to know that you’re walking out there with Ash, and I knew we would get the job done, to be honest,’’ Dellacqua said.

“I had such confidence and faith in us as a team that we were gonna get the job done. Ash had both those singles wins, but Dasha did her part in the team as well. I know she lost both her matches, but it doesn’t matter, that’s what the team’s here for. She went out there and she competed.

Next? The draw that will this week determine their play-off opponent, and whether it’s home or away, and, thus, the need for a surface choice. Or not. But if Barty is always clear about voting for the natural green stuff, then Molik is thinking more broadly, as a captain must.

“I think it’s important to think about where we’re coming from the previous week,” Molik said of the April fixture. “So I think going from hardcourt all summer to grass is a pretty easy transition. I think if you’re going from clay to grass that’s obviously more difficult, and more difficult on everyone’s body’s as well.

“So it’s a matter of: No.1, we play on what we think we can win on; and No.2 we always consider bodies, injures, or what every player’s managing, because you want to perform on the weekend and you want to maximise the week of practice.

“But this has just proven to us that grass is a great option for us, so we’ll always consider it in the future, for sure.’’

On Sunday, it was more about a cake for Dellacqua, relief/joy/etc after a slightly narrow escape, and, in Molik’s words “a moment to take stock”.

“Yes, we’ll celebrate, but it’s been a long summer for everyone, for really different reasons,” she said.

“After doing the pre-season and playing all of January, everyone’s had their little niggles and things that they’ve been taking care of within their careers, so I think it’s just a moment to take stock, relax a bit and Casey always mentions that it’s so rare the we spend a couple of nights together as a complete team.’’

And a winning one, in just Australia’s second home Fed Cup tie in two years. Lots to commemorate and savour, and cry about.