During a media conference in Canberra on Tuesday, Ash Barty and Daria Gavrilova discussed the venue, surface and opposition as Australia prepared for battle against the Ukraine. Here are some of the highlights from their chat.

A temporary grass court in Canberra

BARTY: “It’s perfect. It’s a gorgeous court. We had a photo sent through last week and it’s in really good nick. It was nice to get out and have a first hit on it. We’re very lucky to have these sorts of facilities put up for us for our tie.”

“This is an amazing set-up. It honestly is one of the best that I’ve ever played at, especially in Australia for a Fed Cup tie. It’s exciting to have such a beautiful courts, all the stands set up – hopefully we can fill it and have a really good weekend.”

BARTY: “For me it is (good to get on the surface). I love it. I feel most at home on the grass. It’s no secret – I think everyone knows I love getting on a grass court and love playing my game on a grass court. I’m really excited that we have a tie in Australia – I haven’t payed a home tie for a very long time and to be on grass is a bonus.

“I think obviously grass was our (Australia’s) choice. We’re all very comfortable on a grass court but the girls in the Ukrainian team all hit a reasonably flat ball, so it suits them as well. I think we’ll try and use it to best of our advantage as we can and then try and bring our game plan and try and pick them apart a little bit.

GAVRILOVA: “Yeah I love grass. I really enjoy playing on it. It’s obviosuly really good on your body as well. And I feel great – I’ve only had two hits so far but I feel pretty good.”

“Probably didn’t hit as clean as we were hitting on the hard court but you kind of get grooved and get used to it and you just know that you’re not going to expect a perfect bounce every time. You just have to work that little bit harder.” 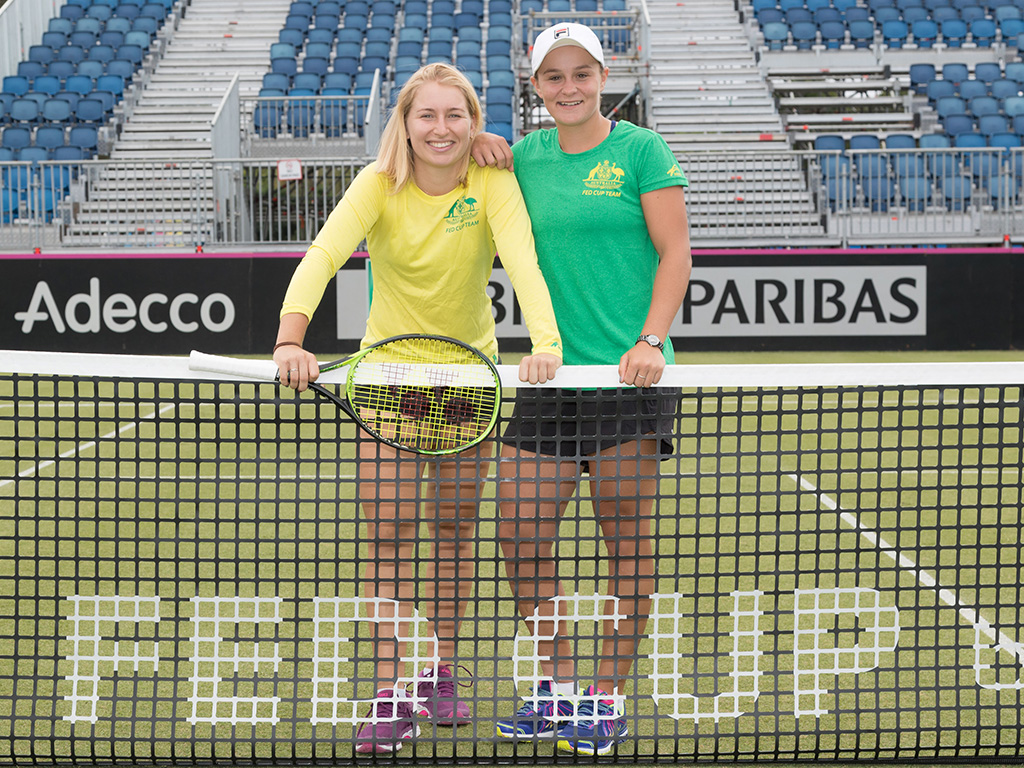 BARTY: “I think any time you can test yourself against one of the world’s best players, it’s what you want. But in the same breath I think for us we’re happy to play against whoever, and we’ve got an opportunity here this weekend to do well and to put ourselves back in contention for the World Group.

“I haven’t seen much of (Marta Kostyuk) play, actually. I haven’t seen any of her matches. We’ll sit down, have a bit of a look. And obviously we have an amazing team behind us that can give us the tactics, the footage, the vision, everything we need to set a game plan and go out there and execute.

GAVRILOVA: I have seen a bit of Marta and I know the Kichenok sisters pretty well so I do know the team pretty well. They’re a strong team. They’re really strong mentally and they’re gonna get out there and fight.”

The beauty of Fed Cup

GAVRILOVA: “Like Ash said, the court is beautiful, and being in a team environment is always so much fun, and we all get along well together and we’re really good friends. So I just can’t wait to play for Australia and for all my friends.”

BARTY: “I think it’s nice for us not to have to travel. Obviously for the Ukraine girls they’ve also been in Australia for the last couple of months. So the weather doesn’t have a massive impact (in terms of an advantage for us). But for us there’s nothing better than playing in front of a full crowd. Hopefully we can fill out the stadium and have some noise on the weekend.”

Can Australia win the Fed Cup?

BARTY: “I think we all know we’ve got that confidence around us. We’ve got a very strong team and a very well-rounded team. And I think that’s really important. We have to do a job this weekend to try and put ourselves in contention for the World Group next year.”