Alcott takes on top seed David Wagner on Saturday, who is also a three-time champion in Melbourne. 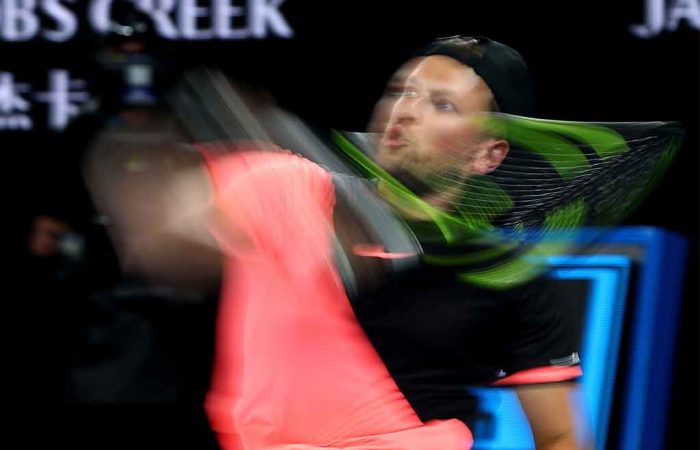 Just 24 hours after teaming up for glory in the quad wheelchair mixed doubles, Dylan Alcott maintained his pursuit of a fourth successive Australian Open singles title with a 6-2 6-0 triumph over close friend Heath Davidson.

Alcott was in scintillating form, firing down 23 winners under the bright lights on Rod Laver Arena to set up a trophy showdown with top seed David Wagner on Saturday.

“It means the world to me to change the way people perceive people with disabilities,” said the three-time defending champion, who was buoyed to play on the Melbourne Park show court. “But also to see us as athletes first and foremost, who just happen to be in wheelchairs.”

“To get that opportunity and to play this match with my best mate Heath Davidson, is a dream come true,” added Alcott, paying tribute to his opponent.

“We train together every day at Melbourne Park. This is our home. Not even Roger Federer gets a Grand Slam five minutes from his house. I’m so lucky I get that! I love Melbourne, I love this tournament and I’m looking forward to coming back tomorrow.”

Australian F1 legend Mark Webber was amongst the guests in the stands and it was Davidson who raced to 2-1 break lead.

However, Alcott soon clicked into gear and a deft drop shot ignited an immediate break back.

Six smart forays to the net enable the reigning champion to wrestle away the initiative in the first set, as he stormed through 11 consecutive games to launch into the final.

Alcott takes on top seed Wagner on Saturday, who is also a three-time champion in Melbourne.

The duo contested the 2015 and 2016 quad singles finals, with the home favourite storming to straight-sets victories.

“David and I have played in about 50 finals together over the past four years, here at the Australian Open too. It’s going to be really close, he’s a great player,” continued Alcott, who saved four match points during a pulsating three sets defeat by the American in the round-robin stage.

“My dreams are coming true being able to do this kind of stuff.”