The world No.17, seeded at a Grand Slam for the first time, withstood 41 winners from the Belarusian. 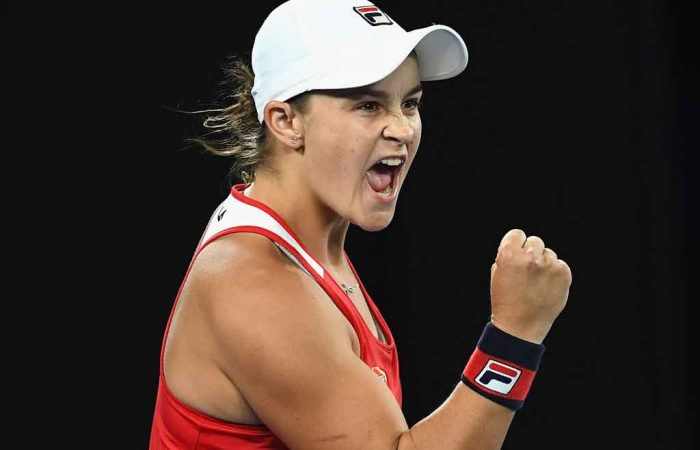 Australia’s leading charge Ashleigh Barty was forced to withstand a barrage of blistering shots from Belarusian Aryna Sabalenka to prevail 6-7(2) 6-4 6-4 to ignite her title pursuit.

“I think last year set me up perfectly for this kind of match,” added the Australian, who soared up the rankings in 2017. “I probably should have closed out that first set, but I knew If I hung about long enough, I would give myself a chance.

“I’m very happy to get through that match and to have another chance on Thursday.”

The world No.17, seeded at a Grand Slam for the first time, sauntered to a 3-0 lead, but was dragged into a tiebreak by her teenage opponent’s unwavering firepower.

Sabalenka, who finished on 41 winners, was pressing Barty in the second set, but the home favourite managed to level the contest with an ace.

It was the third set which saw the match truly spark into life. Sabalenka was relentless in targeting the lines, whilst Barty combined exemplary defence with well-timed forays to the net.

A miraculous lob, backpedalling towards the baseline, enabled Barty to hold for 1-1. At 1-2 the 21-year-old was required to curl a sumptuous forehand passing shot down the line to remain in touch.

Those two winners seemed to crack Sabalenka’s resolve, with the bullet shots beginning to miss the mark. A composed Barty stole the vital break at 3-2, roaring to victory following another sweetly struck ace.

“There were times in the match when I wasn’t going to have a say,” said Barty, having booked a second round against Italian Camila Giorgi. “Once I got my slice going, I was able to dink a few in to gain more points.

“I knew what was coming, but I just had to worry about myself.”