Barty relishing role as Aussie No.1

Not long after becoming Australia's top female player, Ash Barty is now the nation's No.1 player - man or woman - and has continued her winning ways. 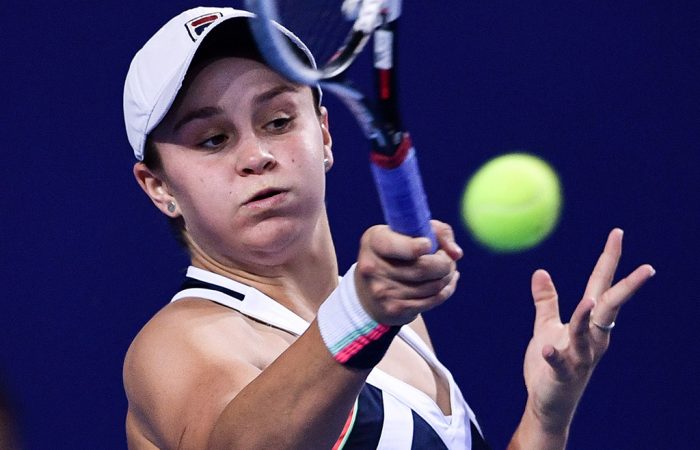 The newest member of the world’s top 20, Ash Barty is now Australia’s highest-ranked player across both the ATP and WTA tours.

Nick Kyrgios this week slipped to No.21 in the ATP standings, meaning Barty stands alone at No.20 – not long after becoming the nation’s top-ranked female.

And the Queenslander seems to be comfortable at the top, winning her first match in Zhuhai with a 6-4 6-1 demolition of the in-form Anastasia Pavlyuchenkova.

Should she beat Angelique Kerber on Thursday, she’ll move through to the semifinals.

After this tournament, Barty will – after a much-deserved off-season break – turn her attention to the Australian summer, where she began her season this year ranked outside the world’s top 250.

“I think it’s exciting,” Barty replied when asked how it would feel to return to Australia with a far greater stature.

“For me, for all Australians, there is always pressure. Going into the Australian summer it’s a massive time of year for us.

“I love playing at home, and there is no more pressure than I put on myself to perform well and play well at home. That’s where I want to play my best for the year, to really sort of support our fans who give us so much back in return.

“We’re very lucky to be a Grand Slam nation where we can start the year off at home and be in Australia for the first couple of months of the year.”

Barty’s season has been all the more extraordinary considering that it was her first full season on tour since 2013.

She stepped away from the sport following the US Open in 2014, and only returned to singles midway through 2016.

Her rapid ascent has caught the eye of many players including Sam Stosur, the long-standing Aussie No.1 until June this year and who beat Barty in a competitive two-setter in Miami in March.

“It’s really good to see she’s been doing so well … I’ll definitely be following those results (in Zhuhai) closely.

“As far as not being the highest-ranked (player anymore), that’s OK … obviously just wishing that we (Aussie women) all do well, so that’s the main goal.”