A record number of Australian children have played tennis in 2016/17. 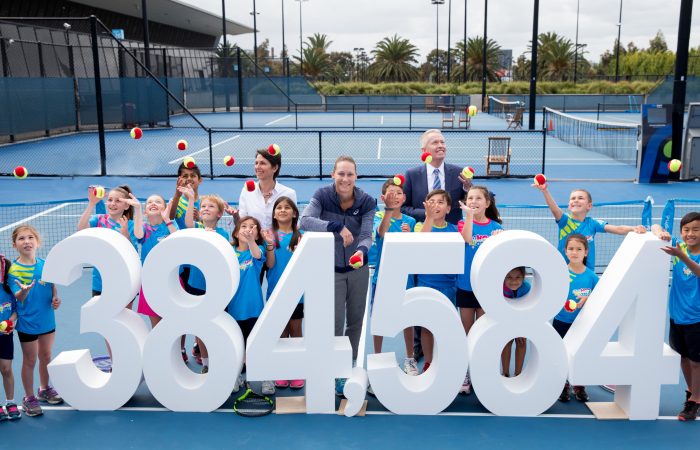 A record number of Australian children have played tennis in 2016/17, with 384,584 participating in the ANZ Tennis Hot Shots program in primary schools and clubs.

“Tennis has long been a passion for my family and I and it’s a privilege to be here today to recognise the great success of the ANZ Tennis Hot Shots program over the past 10 years,” Ms Hrdlicka said.

“It’s very encouraging to have so many kids involved, through both schools and clubs, and it’s a great indication of the health of sport.”

“We’re incredibly proud of the progress the ANZ Tennis Hot Shots program has made in its 10 years,” Craig Tiley said.

“This program allows children to get active and encourages a healthy lifestyle in a simple, fun and friendly environment that fosters physical development and wellbeing. We look forward to building on this momentum and ensuring more and more children across Australia have access to a tennis racquet in the future.”

The modified program, featuring smaller courts and nets, larger racquets and low-compression balls, is designed to make learning the game easy and fun for kids. It was launched in 2008 and attracted 11,696 participants in its first year.

The rapid rise in popularity over the past 10 years has seen ANZ Tennis Hot Shots become one of the leading junior sports participation programs in the country and the No.1 sport delivered in schools through the Australian Sports Commission Sporting Schools initiative.

There are now more than 2200 schools across the country participating in the Schools Partnership Program as part of their health and PE curriculum.

The results also highlight the appeal of tennis to both girls and boys, with 44 per cent girls and 56 per cent boys making up the numbers.

With an ever-increasing focus on encouraging kids into tennis as part of a healthy lifestyle, more than 80,000 racquets have been presented to first year primary school students since 2015, thanks to the ongoing partnership with ANZ.