Juniors Maggie Pearce and Megan Smith are representing Australia at the WTA Future Stars event in Singapore this week. 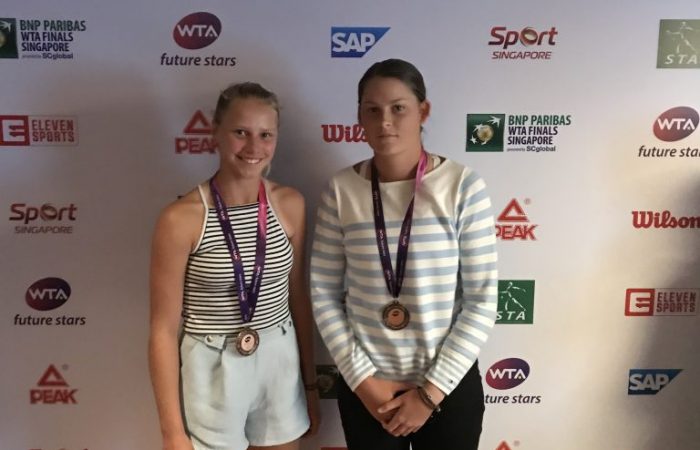 Pearce and Smith won their respective 14-and-under and 16-and-under qualifying competitions earlier in the year to earn their spot in the prestigious junior tennis tournament.

WTA Future Stars Tournament Director Donna Kelso said the program continues to grow with more countries represented than ever as the quality of the competition builds.

“The WTA Future Stars initiative continues to engage with the budding tennis talent across Asia Pacific,” Kelso said to wtatennis.com.

“During their time in Singapore, the young players get to interact with their peers from the region, building invaluable bonds that form the foundation of a support system as they continue to rise up the ranks in the coming years.

“Aside from the competition and the tips they pick up on court, we hope that the girls also learn about diversity in cultures, backgrounds and experiences from one another.”

“WTA Future Stars is a significant competition that provides top junior female tennis players from around the Asia Pacific region with the opportunity of a lifetime,” Pratt said.

“To be able to train and compete on the same courts alongside the top eight players in the world is a fantastic opportunity for both Megan and Maggie. They have the chance to meet others from around the region and see what it takes to compete at the highest level.”

Team captain and former Davis Cup player Sandon Stolle will accompany the girls as coach and mentor in Singapore this week.

Pearce earned her spot after winning the most aggregate points across the seven eligible qualifying tournaments held throughout 2017.

“Being able to represent Australia at the WTA Future Stars is a really big accomplishment for me,” Pearce said.

“I’m looking forward to the whole experience, gaining valuable insights and meeting the players from other countries.”

Smith was awarded the opportunity after making the final of the ITF Oceania Closed Junior Championships in Fiji in August.

“It feels amazing to be heading to Singapore and to have the opportunity to represent Australia at the WTA Future Stars. It will be a great experience and allows me to compare my ability with other girls my age,” Smith said.

Launched in 2014, the WTA Future Stars program aims to encourage young players throughout the Asia Pacific to live a better life through sport.

Forty-eight players from 21 countries across the Asia Pacific region will compete in Singapore at the WTA Future Stars tournament.

For more information about the event, draw and schedule please visit www.wtafinals.com/players/wta-future-stars