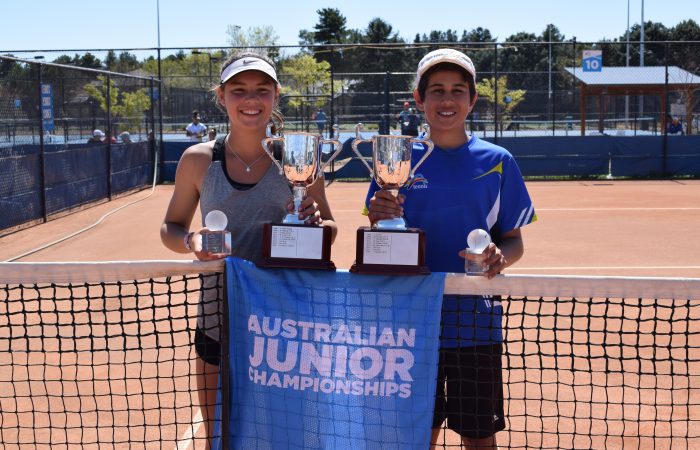 The past week has seen Australia’s most promising 12/u and 14/u juniors battling it out in Canberra for the 2017 Australian Claycourt Championships.

“Canberra Tennis Centre is home to some of the nation’s best clay court facilities so it is only fitting the tournament was held here.

“The tournament was a huge success, we saw a lot of high quality matches played and some real potential for these players to develop into future stars of the sport.

“The championships cap off a busy couple of weeks for Tennis ACT which has also seen us host the Canberra Junior International and the first ever Canberra Wheelchair Tennis Open. Later this month the Australian Pro Tour will make its way here with the Apis Canberra International, a Men’s ATP Challenger tournament and Women’s ITF Tour.”

Proving to be a force to be reckoned with, for the second consecutive year, thirteen-year-old Anastasia Berezov (Terrey Hills, NSW) has claimed both the singles and doubles 14/u Claycourt Championships titles, backing up her wins from last year.

“It feels really great to win again, I worked really hard throughout the tournament so it was great to come out on top,” Berezov said after taking out the title.

“I played a pretty consistent game, I really tried to keep my head in the game and maintain my focus.

In the boy’s draw, Cooper White (Alphington, Vic) was crowned the 14-and-under Australian Claycourt Champion, after taking out the boys’ title against WA’s Derek Pham.

Cooper has continued an impressive year where he earlier represented Australia at the ITF World Junior Tennis Finals in Czech Republic.

“It feels great to win a national title, I was a finalist at the Grasscourt Championships earlier in the year at Berri so it’s good to get the win today.

“I played the Canberra Junior International last week on these courts, so I felt that really helped me get familiar with the surface which gave me a bit of an advantage.