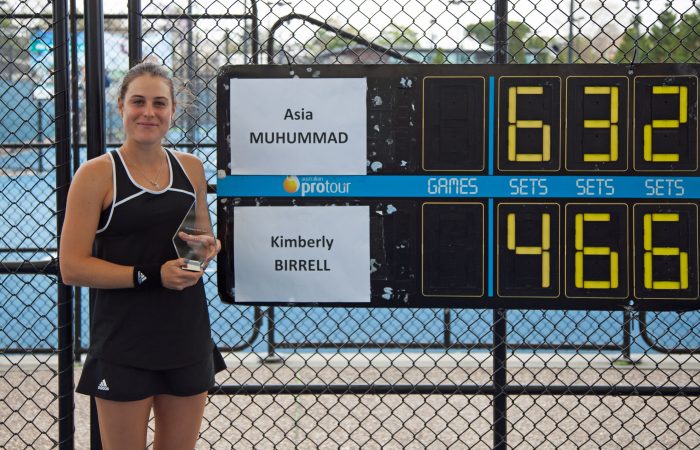 Unseeded Kimberly Birrell has delighted the home crowd after winning her maiden Pro Title in Brisbane on Sunday.

After making the final in Penrith last week, the 19-year-old Queenslander went one step further at the Brisbane QTC Tennis International, coming back from a one-set deficit to defeat top seeded American Asia Muhammad for the second time in a fortnight, 4-6 6-3 6-2.

“I definitely had some confidence going in today after I played her last week. I knew what my game plan was going to be,” Birrell said. “She played well but I knew what I needed to do and it paid off.”

Birrell paid tribute to her friends and family courtside. “It was so good to be out on court today,” she said.  “It’s just so nice to get my first Pro Tour win in front of everyone.

“I feel lucky to be able to train here and have a tournament like this here.”

Birrell spent much of 2016/17 in rehabilitation after undergoing elbow surgery this time last year.

“I was watching this final last year in a cast,” she said. “I knew it was going to be a long process but I’m finally starting to get my confidence back and I’m just really enjoying being out there.”

The unseeded duo of Naiktha Bains and Papua New Guinea’s Abigail Tere-Apisah were crowned doubles champions in Brisbane on Saturday after dispatching the No.3 seeds – American Jennifer Elie and Japanese Erika Sema – 6-4 6-1.