Into the Wimbledon main draw after three impressive comeback wins in qualifying, Victorian Andrew Whittington is looking to continue his improbable run. 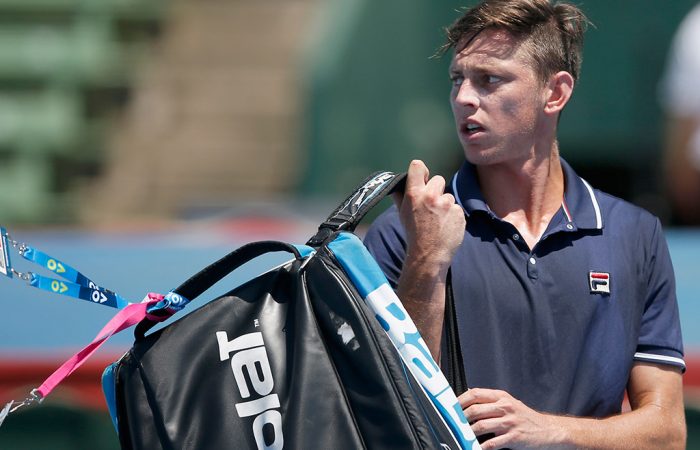 He grew up idolising Mark Philippoussis and now Andrew Whittington is following in his one-time neighbour’s footsteps after gatecrashing Wimbledon with an improbable march through qualifying.

Unheard of outside tennis circles, Whittington’s succession of victories over higher-ranked rivals has propelled the 23-year-old into his second Grand Slam main draw of the year after reaching the second round in front of home fans at Melbourne Park.

“Everyone was ecstatic back home,” the world No.209 said ahead of his first-round date with Brazilian Thiago Monteiro on Monday.

“(Stephane) Robert, being top 50, and then Tim Smyczek, he’s qualied a couple of times and then (Denis) Kudla, he’s made the fourth round here.

“I had to do it the hard way and probably still can’t actually believe I’m in the main draw, but hopefully it will sink in.

“Tennis has its high and lows, that’s for sure, and this is a definite high. I’ve just got to keep everything in perspective and just embrace it as much as I can.”

Whittington knows the 98th-ranked Monteiro offers him a big chance of continuing his run, which has already guaranteed the battler a $59,000 pay day.

“It’s one of the better draws, I could’ve faced (Andy) Murray,” he said.

“It’s another great opportunity to come out here to Wimbledon for the first time (in singles).

“I’m just happy I’m in the draw and I’m going to enjoy it as much as I can, go out there and hopefully play my best tennis.”

He was just nine when Philippoussis reached the 2003 final at the All England Club, but very much recalls the dual Grand Slam runner-up’s rock-star presence. “I used to see the blue hummer,” he grinned.

“I think we play the Bryans (Americans Bob and Mike) first round so that will be another interesting match,” he said.

“We had a great run at the Aussie (Open), so you never know.”