Omar Jasika defeated John-Patrick Smith in the AO Play-off on Sunday, ensuring he will return in January to Melbourne Park, the site of his best major result in 2016. 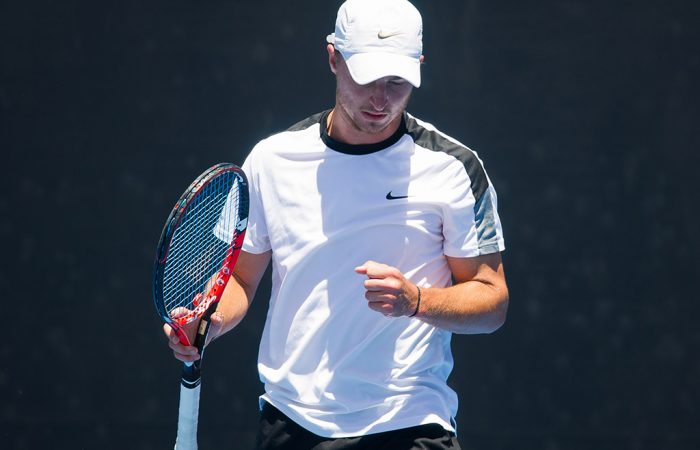 Omar Jasika rebounded from a frustrating first-set meltdown to win a place in the Australian Open with a four-set AO Play-off victory on Sunday.

Jasika, 19, stuttered early before steamrolling Queenslander John-Patrick Smith 6-7(2) 6-2 6-0 6-4 at Melbourne Park to win a coveted wildcard for the 2017 tournament.

Jasika’s success means a return to the Grand Slam stage after successfully debuting at Melbourne Park this year with a second-round appearance.

“I’m happy to be in the Australian Open in 2017. Looking forward to it. Last year was a great experience; one of the few days I won’t forget,” said Jasika, who in 2016 beat Illya Marchenko in the opening round at Melbourne Park before falling to Jo-Wilfried Tsonga.

“I feel definitely stronger and fitter (12 months on). I’ve been on the tour for a little bit longer and picked up a lot stuff … and I’ve had a chat to a few of them (players on tour) and I’ve learned a lot over the last few months.

“I just feel like I’m going to start having good success and hopefully I can keep going.”

But it wasn’t always plain sailing for the world No.367, taking on a player eight years and 137 rankings places his senior.

The former junior US Open champion was so frustrated by losing the first set – he had earlier held set point – that he thrashed his racquet into the court.

After the rage came the rally. From 2-2 in the third set, Jasika won 10 straight games, returning with poise and hitting smartly around the court.

He needed a bundle of break points in the seventh game of the second set, before finally converting and then holding at love in the next game to level the match.

In the third, the Victorian truly loosened up, rifling a number of winners; he fired a forehand passing shot off a Smith overhead en route to a double break and a scorching backhand pass winner to make it 5-0, before acing Smith to take the set.

Smith found form in the fourth set, but gave up a break in the ninth game and with it, the match.

Jasika, much like he did in the third, produced some impressive winners to close it out – a forehand passing shot winner was followed by an ace, and the Australian Open wildcard was his.

“I was trying to think of patterns to play against JP. I started to get more rhythm and not miss. I picked up my game a bit. I was running round my forehand and using it. I was a bit slow in the first set, a bit nervous, but started not missing a lot,” Jasika said.

“It was a bit up and down. Close first set. It was a great match throughout the whole thing. I really enjoy playing JP – we have some great battles. We’ve played a few times now. He’s a good friend of mine – it’s tough to play a good friend sometimes.”

Jasika’s wildcard victory was all the more impressive considering that in the first round, he was down two-sets-to-love and a break against No.3 seed Marinko Matosevic.

“I was a little bit nervous playing Marinko – Marinko has been training well, we’re friends as well,” Jasika said.

“To be honest, I was thinking I’d lost already (when down against Matosevic). But I found a way to win that, and started to get better and better and got mentally stronger.

“I guess it gave me some confidence, that match.”

The victory completed an impressive day for the Jasika family – earlier on Sunday, Omar’s brother Amor won the 12/u Australian Championships title.

> READ MORE: Victories for Jasika, Kempenaers-Pocz in 12/u champs