Chris O'Connell has produced a measured performance to oust Sam Groth in five sets at Melbourne Park on Wednesday, leaving the AO Play-off without any of its top four seeds. 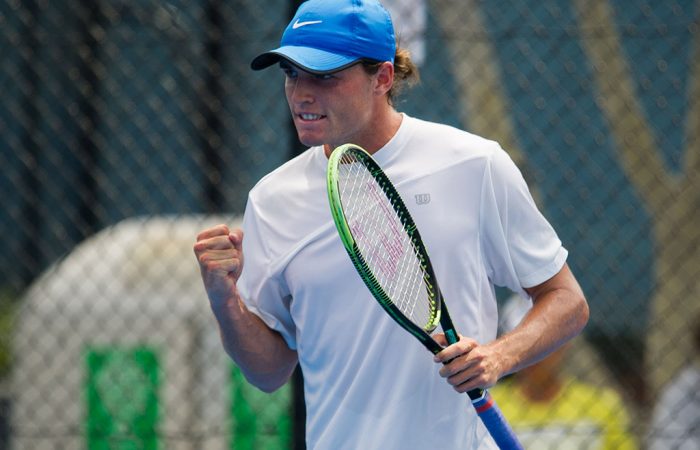 Chris O’Connell held firm in a tense final set to upset No.2 seed Sam Groth at the Australian Open Play-off.

“It feels amazing. I’m in the semifinals and really looking to push forward and keep going,” O’Connell said.

“I seemed to return really well today, I was seeing it really well. And then I was backing it up with my service games.”

With Groth’s exit, not one of the tournament’s top-four seeds remain; earlier on Wednesday, No.1 seed Andrew Whittington and fourth seed Marc Polmans were eliminated, while No.3 seed Marinko Matosevic was shown the door on Monday by Jasika.

Jasika on Wednesday reached the last four with a 6-4 6-0 6-2 win over Queensland’s Van Peperzeel.

The victory over Groth continues O’Connell’s breakout season, in which he has won five ITF Futures titles and improved his ranking by almost 400 places to a career-high No.240.

“One of the biggest things is I’ve been injury free. I haven’t had one injury all year,” O’Connell said when asked to explain the factors behind his rise.

“I decided this year just to play a lot of matches. I think I’ve played over 80 matches this year and I’ve predominantly been in Europe – I was there for about seven months just playing week-in and week-out on the clay so I’ve got a lot match fitness and experience.”

O’Connell nabbed the first set with an athletic backhand smash before Groth – a former world No.53 – got the match back on level terms in the second set.

The players split the third and fourth sets before O’Connell looked to have the match well and truly sealed when he surged to a 4-1 lead in the fifth.

That’s when Groth began to make a charge, landing a barrage of powerful first serves and then breaking O’Connell to love, part of a three-game run that saw him level the set at 4-4.

“When I got broken, I just had to re-set and go again,” O’Connell said.

Games then went on serve – O’Connell held in the next game with a magnificent reflexed forehand winner off a powerful Groth return – until the 14th game.

Groth dumped a backhand volley into the net to give O’Connell the win.

“I’m really looking forward to that next match and if I happen to get through that, I’d love an opportunity to get a wildcard into the Australian Open. It would be awesome.”