Djokovic too strong for Tomic

World No.1 and defending champion Novak Djokovic has ended Bernard Tomic's Wimbledon campaign with a straight-sets win on Centre Court on Friday. 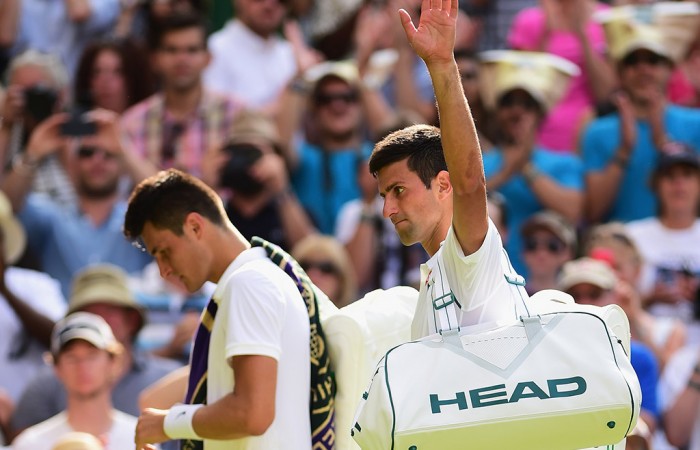 World No.1 and defending champion Novak Djokovic has ended Bernard Tomic’s Wimbledon campaign with a 6-3 6-3 6-3 win over the Australian No.1.

The Serb has not dropped a set so far in the championship.

“I played okay. He was playing very good. It just shows you why he’s the best. Those tough games, the score looked a lot closer than it was. It was very close in moments, but somehow in those big points he just gets that,” Tomic said.

“I can’t even describe it in words. Too good, too good. To get to that level, you need to work hard.

“I learn a lot every time I play Novak. It’s a great honor. That’s why he’s the best player in the world … It just shows you what he can do on the court. That is, that I’m missing, obviously I would say I played the power game, served well, and obviously don’t have the speed yet and anticipation and the balance, which I think nobody does have it like him.

“Unfortunately I have to work to get a little bit better in that area. I felt it was close every game, but the score, he just killed me today.”