US Open: Rodionova keeps on rolling

UPDATE: Anastasia Rodionova has continued her impressive form going in US Open qualifying, and will play for a spot in the main draw on Friday. 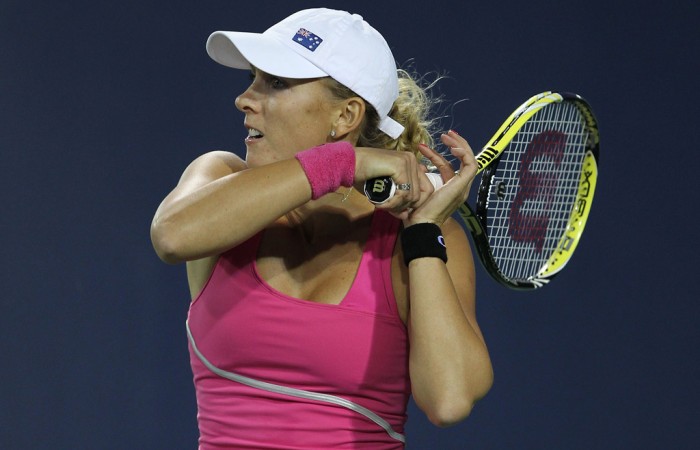 Anastasia Rodionova has continued her impressive form going in US Open qualifying, rolling to a straight-set victory over France’s Caroline Garcia.

On a warm and sunny day at Flushing Meadows with a sizeable crowd in attendance to watch the day’s qualifying play, Rodionova won 6-2 6-4 in one hour and 19 minutes.

The win sees her move through to the final round of the women’s qualifying tournament, where standing in between her and a berth in the main draw is Veronica Cepede Royg. The Paraguayan overcame Bulgaria’s Elitsa Kostova in three sets.

It was an especially impressive win for Rodionova given the hype surrounding Garcia.

The young French player was tabbed as a superstar in the making by tennis pundits when she lead Maria Sharapova 6-3 4-1 in the first round of the 2011 French Open (she ultimately lost), her stylish game even prompting Andy Murray to declare her as a future world No.1.

Yet she was no match for the Australian world No.161, who broke serve four times from four chances to breeze to a convincing win.

There was less to celebrate for Australia on the men’s side, however, with James Duckworth and Brydan Klein both falling in tight three-set matches.

Duckworth performed strongly against No.30 seed Bobby Reynolds of the United States, but lacked a little of the experience of his higher-ranked opponent.

Reynolds claimed the opening set after converting a service break he gained in the 10th game, and he scored another break deep in the third set to run out a 6-4 3-6 7-5 winner.

Klein overcame a disastrous start against No.24 Karol Beck, his impressive scrambling in the ninth game of the second set forcing the error from the Slovakian and helping Klein snare a service break to lead 5-4.

After serving out the second set and levelling the match, Klein looked destined to record an exciting come-from-behind victory when he went up a service break in the third set.

Yet he could not maintain the advantage, allowing Beck to break back and eventually claim a 6-1 4-6 6-4 win after two hours and 15 minutes.