Eliza Long won the battle of the Victorians for the Optus Girls 16s Championships title after she defeated Brigitte Beck in two sets at Melbourne Park today. 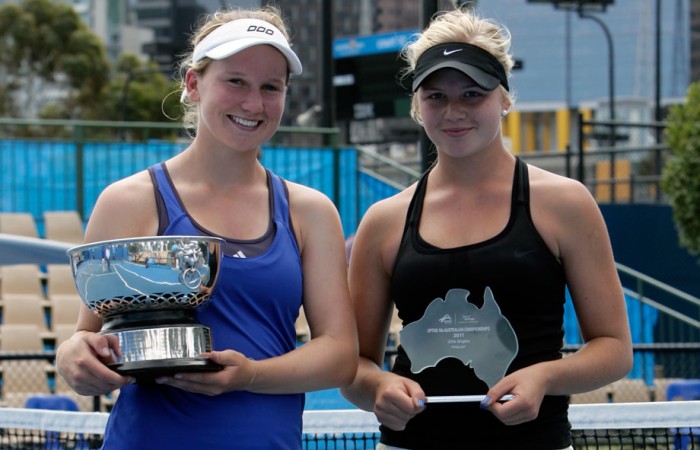 Eliza Long won the battle of the Victorians for the Optus Girls 16s Championships title after she defeated Brigitte Beck in two sets at Melbourne Park today.

A crowd numbering in the dozens watched as Long took out the title 7-5 6-3 and in the process claimed herself a surprise wildcard into the Australian Open Juniors event in January.

Long said she was overwhelmed by the magnitude of her victory.

“It hasn’t actually hit me yet that I have won but I’m sure the excitement will come pretty soon when I see my friends and family,” she said.

Long said she was surprised by the news she was being given a wildcard to the prestigious juniors event.

“I didn’t even think about it at all coming into the tournament and now just as I’m sitting out there they’re telling me I’m getting a wildcard. It’s just really exciting. “

The Melbourne rain delayed the final but by mid-afternoon the tennis Gods blessed the precinct with billowing sunshine.

Despite the ensuing heat, Long maintained an emotionally icy state. The teen refused to allow her feelings to dictate her game and instead kept composed.

Each ball travelled deep to her opponent’s side of the court making it difficult for Beck to find the winner.

The pair has never played each other in competition despite being from the same state and the match proved a tug of war.

Beck seemed to gain the ascendency when she held serve for a 4-3 lead. The 15-year-old placed immense pressure on the Long serve surging toward the net whenever given the opportunity.

But it was the cool and collected Long who was able to take the vital break and provide herself the opportunity to serve out the set at 7-5.

Beck started the first set by commencing her attack at the net with relative success. The Victorian held her first serve but was broken in the third game to allow Long the upper hand.

The defining moment of the match came when Long obtained a break in the fifth game to take a 3-2 lead.

It was all smooth sailing from there for the Victorian as she raced to a 5-2 lead, eventually taking out the second set 6-3.

Long, who had never made it past the quarterfinals stage at the nationals, event said she was thrilled with how she played.

“I couldn’t be happier. I just kept trying to fight every single point and even when she started to come to the net and [was] playing really well I just had to keep thinking that I still had a chance,” she said.

She said the key to her win was her variety in shot selection.

“She liked to have the flat ball hitting and I just tried to do a bit of spin, keep it deep and do a few lobs and drop shots.”